Not too much to report. In my last article about baking in the wonderful city of Berlin, I wrote about the single-acting baking powder that is used here called Backpulver. I didn’t quite label it as inferior, but I did state that the American baking powder was superior. Well I guess I’m now starting to doubt the superiority of the double-acting blend because the pancakes I just made were great. If memory serves correctly, double-acting just means that at a certain temperature (like 160F), a secondary reaction occurs that releases some gas that is trapped in the form of bubbles to provide a rise.

This post kind of got me interested in reading about the history of baking powder. It was, in fact, a German pharmacist who drove baking powder into popularity by selling it to housewives. Fascinating that our everyday baking product was not even around a few hundred years ago. Before that, they would use the good ol’ baking soda + acid (like your school day volcano project). Baking powder was an amazing invention because it delays the formation of the bubbles which enables the bread/dough to hold form.

Back to the bake. We had the extreme craving for my world famous pancakes. The state of mind we were in was frantic. Most likely it was very much like the mind of institutionalized pancake addict who cannot think of anything else but sweet, delicious, mouth watering goodness. Maslow’s hierarchy of needs has pancakes as the base level, a must have before anything else. Anyhow, the wheels were set in motion. This time around I looked around online for pancake recipes in German so I can learn about the measuring. From what I can tell, they do use teaspoon and tablespoon based measurements in their recipes. I have since ordered a few plastic spoons to carry along with us on our world adventure. Back to the lab. I did mention before, Germans are reluctant to integrate microwaves into their kitchens. Well I had a need to melt butter to integrate into my batter. Butter for batter. I didn’t want to melt the butter directly in a saucepan because I didn’t want to clean it. Or maybe it’s because I’m weird. In any case, I created a double-boiler using a saucepan with a few inches of water, a thick IKEA drinking glass, and a homemade aluminum insulater-coaster-thingy. It worked, but it cracked the glass. It was not okay with the heat apparently. 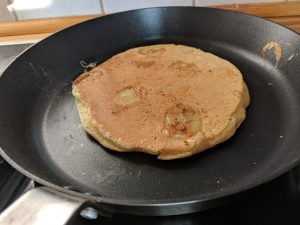 So that’s it on the pancake adventure. We used backpulver, sugar, bananananas, flour, salt, eggs, butter and almond milk. They were de-lish. This time the pancakes turned out much more cake-like – sweet like a layer cake. I’m pretty sure this was because I measured everything by sight, dumping it my hand or scooped into a bowl.

Here’s a shopping list of the things I mentioned in this post with both German and American varieties. Enjoy your pancakes!