Trial by fire. I like to throw myself into situations and figure them out. After a lifetime of baking under my belt I figure I can just make things on instinct. This isn’t true, however this time I got lucky. My life path of baking has instilled techniques, now second nature, that move me around the kitchen. Some of these are tactile, relying on the olfactory or a calculated procedure.

Every baker knows his kitchen

and I’m talking about tools. The pans, the spoons, the scales, the containers, the chems, the spray bottles – all of it. Well, even in these lovely homes that support wonderful well fed people, these kitchens are more foreign to me than the straße signs.

In my opinion, er I should say – in this baker’s inexperienced opinion – I believe that the proper thing to do is to bake like the Germans bake. Don’t convert recipes, don’t puzzle out fahrenheit oven temps, don’t import American supplies – simply conform.

Given our budget, we’re eating cheap and we’re cooking a LOT. I’m enjoying the cooking challenge so far. It’s more satisfying than this dull Duolingo course I’m doing. During the American Biscuits in Deutchland experiment, here’s what I’ve learned so far:

So anyhow my experimental concoction worked. The risks 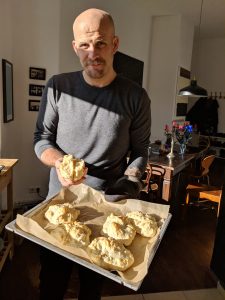 were that we had no measuring devices, blended cream (I know what I said above, uh), and rock salt. I winged it – they had one liquid storage container that had markings on it for increments of millimeters. I used this container to visually measure out what I thought looked like a couple cups – dump it. Empty 3 packets of Backpulver (yup, it comes in packets), ground up the salt between two spoons and mixed it all with a fork. Then I added two containers (think school milk box) of cream. Mixed it. It was garbage.

I expect the feel of the dough to be just like playdoh. I had to keep messing with it until I felt I was risking too much flour (not enough fats) and just dropped them onto a baking sheet. It was wetter than I liked – I couldn’t get the right feel, but my instinct told me to stop. I should listen to those more often. 190c in the oven. It worked!

So for baking, I’m dearly missing:

I say the thermometer because I’m missing it – but I used it primarily for stove top. I got my parent’s one, but they didn’t seem to take interest in it. I think they’re essential to any kitchen. Instant read of any surface, liquid, object, person. Its awesome. I used it most for egg prep and coffee.

Thanks for reading – that’s all for now. Now tell me:

Here’s a shopping list of the things I mentioned in this post with both German and American varieties. Enjoy your biscuits!